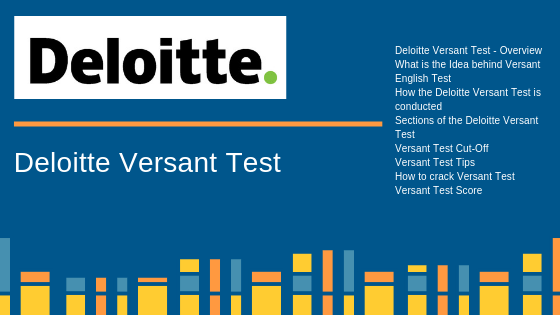 Deloitte Versant Test is an automated spoken language test that are taken on the computer. This takes place in the second round of the Deloitte Recruitment Process only after you clear your first round which is the Deloitte Online Test.

The main purpose of this Versant test is to assert the importance of English communication for jobs in the knowledge economy. Ability to speak and comprehend the English language in a neutral accent is important for any job that involves interaction with the customer. Even in jobs such as IT or software development, there is the requirement to interact with multiple clients about the project life-cycle and this requires spoken English skills. Along with that, English is the universal language and for an employee to grow in any field, he/she should be proficient enough in the language for greater opportunities.

The Deloitte Versant English Test analyses the following in a candidate:

In the following points, we'll discuss how the Deloitte Versant test is conducted, the contents of the test, cut-off, and a few important tips to help you clear the Deloitte English Versant Test with ease.

How is the Deloitte Versant Test conducted?

The test is conducted on an IVR i.e. Interactive voice response. To start the test, you will need to call on a number provided to you before the test starts. Normally, Versant test takes place in any lab in your college which has proper pieces of equipment such as a microphone and headset. If this is not the case, Deloitte will arrange a direct call via mobile phone.

What are the sections?

The test consists of 5 sections, as discussed below:

What is the Deloitte Versant test cut-off?

It is important that you do your best in all the 5 sections because every section has its own cut-off. The overall Deloitte Versant test cut-off is 75% which is calculated after assessing all the sections. If you have a good command over the English language, you can easily cross the cut-off. Check how the Versant Test Score is calculated

You will be notified of your selection by Deloitte through your registered e-mail IDs following which you will be called for a Group Discussion/Just A Minute session further followed by a face to face Interview (Technical+HR). In case you don't get any notification, make sure you follow up by sending an e-mail or arranging a call with your placement cell.

deloitte
If you have any feedback about this article and want to improve this, please write to enquiry@faceprep.in
Explore 'deloitte'
Articles
Message From Our Learners!